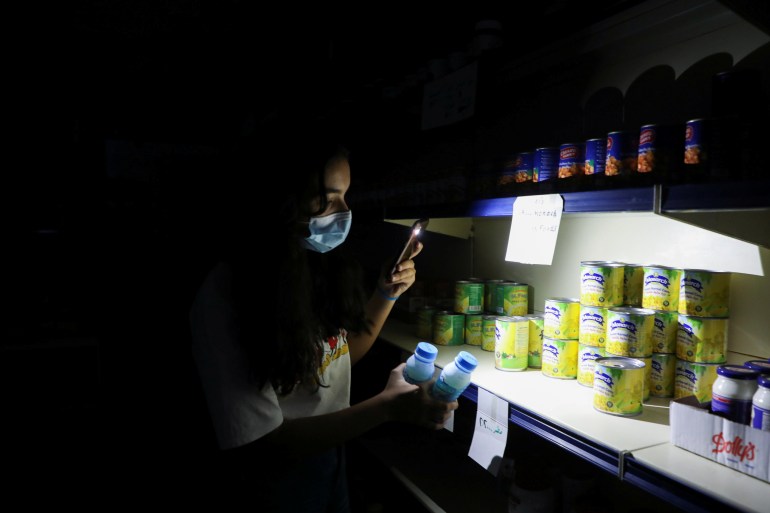 A customer uses her phone’s torch light in a grocery store during a power cut near Bhamdoun, Lebanon

Beirut, Lebanon – The two main power plants in crisis-hit Lebanon have gone out of commission, effectively stopping all state electricity in the country.

The shutdown on Saturday of the Deir Ammar and Zahrani plants, which have generated very limited electricity in recent months, was because of a diesel fuel shortage, sources said.

Residents of Halba in the northern Akkar province protested at the regional office of the state-run producer Electricite du Liban (EDL). In nearby Tripoli, angry residents blocked roads with cars and burning tyres after power cuts worsened water shortages.

“There is no fuel and limited generation, so the variation in frequency is ruining the grid,” Marc Ayoub, energy researcher at the American University of Beirut’s Issam Fares Institute, told Al Jazeera. “It’s happened about 16 times over the past two weeks because generation is too little compared to what is needed for the grid to reach stability.”

EDL has been generating less than 200 megawatts of electricity.

Local media reported the authorities were scrambling to secure fuel from their reserve stock to partially resupply state electricity to several affected areas.

EDL said in a statement that a fuel shipment will arrive Saturday night and will be unloaded early next week to raise power plant capacities to 500 megawatts. Another fuel shipment from an Iraq deal will arrive later this month. In the meantime, EDL said it is communicating with oil facilities in Tripoli and Zahrani to purchase a limited amount of fuel to supply the power plants for the next few days.

The development in Lebanon’s ongoing electricity crisis comes about a week after two floating Turkish power barges off the coast stopped generating power after the expiration of a government contract.

EDL continues to struggle financially to secure fuel to run its power plants. Throughout the year, it has relied on cash advances from the central bank and other stopgap measures to stay functional.

Lebanon’s ongoing electricity woes have exacerbated a crippling economic and financial crisis that plunged three-quarters of the population into poverty and devalued the Lebanese pound by almost 90 percent.

The fuel crisis has paralysed much of public life, forcing much of the population to rely almost entirely on expensive private generators to keep the lights on. Hospitals have struggled as well, fearing the safety of their patients.